Do You Know Nargis Dutt Once Suspected That Son Sanjay Dutt Was Gay? Here’s The Reason

Son of veteran actors Sunil Dutt and Nargis, Sanjay Dutt made his Bollywood debut with the film “Rocky” in 1981. The film was a hit at the box office and made Sanjay Dutt an overnight sensation and ever since there was no looking back for this talented actor. Apart from his professional life, his personal life has always been talked about because of his drug addiction, multiple affairs, and the weapon case following the jail term.

He also shared a warm rapport with his mother Nargis and he was the most pampered kid among his siblings. Sanjay Dutt’s sister Namrata had once revealed in her biography that Nargis tried to be tough with the actor but ended by giving in to his demands. But do you know Nargis once suspected Sanjay Dutt was gay? In her biography, Namrata had revealed, “Once I heard mom say to a friend, ‘Why is Sanjay’s room always locked when his friends are there? What is the big deal? I hope he’s not gay.” 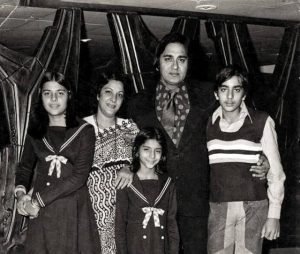 A few days ago, Sanjay Dutt had taken to social media to share some unseen family pictures and captioned it as ‘There’s nobody else like you. Happy Birthday, Ma.’ Take a look: