When Priyanka Chopra Opened Up About Her Lesbian Encounter At Koffee With Karan, “She Was Very Flirtatious, Somebody I Knew”

It was during one of the episodes in Koffee with Karan where Priyanka Chopra had appeared with her Bajirao Mastani co-star Deepika Padukone. Host of the show Karan asked them if they had ever been hit by the same sex or if they had ever had a lesbian encounter. PeeCee had revealed, “Encounters, I wouldn’t know, but I’ve been propositioned.” 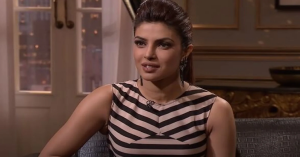 Revealing more about the encounter she had said,  “It could’ve been. It was at a nightclub a few years ago. And this girl, who clearly didn’t know that I don’t swing that way, was being extremely sweet, and very flattering, and very flirtatious. And I didn’t know how to tell her… Because she was somebody, I knew.”

She had further talked about how she turned down the possible lesbian encounter and said, “I just had to be like, ‘babe, I kinda have a boyfriend, which I didn’t at the time. It could have been… But I prefer boys.”