VIRAL Video: Janhvi Kapoor Asks Father Boney Kapoor To Put Mask Back On Amid Pandemic, Schools Paparazzi To Not Give Wrong Advice

Janhvi Kapoor is one of the most gorgeous divas of Bollywood. The actress keeps traveling back and forth for her work. However, despite having a crazy schedule the young actress doesn’t take her family for granted and spends as much time together as possible. Janhvi has often been captured by the paparazzi while coming or going for vacations with his father Boney Kapoor and sister Khushi Kapoor. On Tuesday, the ‘Roohani’ actress was spotted at the Mumbai airport and paparazzi were ready to click their pictures. In a viral video that is doing rounds on the internet, Janhvi opted for a casual outfit with a sports bra and joggers, while Boney Kapoor chose to wear white traditional outfits. 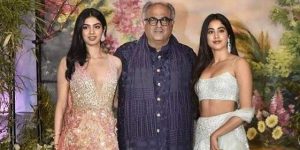 Both the father-daughter duo were wearing masks amid the pandemic covering their entire face. However, the paparazzi insisted the two remove their masks to click pictures, to this, Janhvi immediately refused but her father obliged the photographers. Janhvi quickly asked her father to put the mask back on his face and schooled the photographer.

In the video, while clicking pictures one of the photographers could be heard saying ‘kuch nhi hoga’ while taking pictures of Boney Kapoor. But, Janhvi quickly responded and said, “Hoga, aise galat advice mat dijiye.” The father-daughter then happily posed for the camera and went on their ways. But this small video is winning the hearts of the netizens. “Bilkul shi kaha Janhvi that’s why you are my favourite,” wrote one user. “Well done, it is important to wear mask pandemic has not ended yet,” wrote another user. “Janhvi kapoor is really very caring and kind-hearted person, the way she takes care of her father is incredible,” wrote another user.