Farhan Akhtar and Shibani Dandekar are now finally husband and wife. The duo had been dating for a long time and has now taken their relationship a step further. On February 19th, the couple painted the town red with their mushy pictures from the wedding which seemed to be a very intimate affair. According to reports, Farhan Akhtar had admitted in an interview that a wedding is happening but due to the current pandemic situation, it will be a private affair with close friends and family. 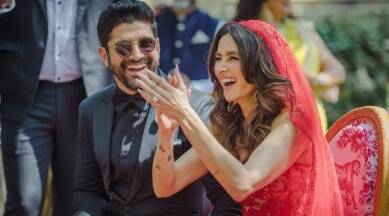 Farhan and Shibani have also registered their wedding in court on 21st February. The couple has been sharing glimpses of their wedding on their social media accounts leaving the fans in awe of the two. Both Farhan and Shibani looked stunning in their wedding outfits as Farhan chose a black suit, while Shibani donned a beautiful red gown. Now, the actress and commentator have shared new pictures from her Mehendi ceremony which leave you with a smile on your face.

Both the love birds could be seen enjoying their special day surrounded by friends and family. In one of the videos, Farhan could also be seen dancing with Hrithik Roshan on the ‘ZNMD’ song Senorita.