Our very own Desi girl, Priyanka Chopra took a private plane to Spain for completing the next shooting schedule of her upcoming series, Citadel. But the picture shared by Priyanka Chopra’s team from inside the private jet is something every Indian will relate to. 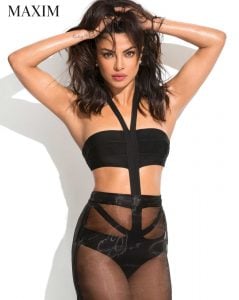 Everyone knows that PC has the busiest schedule as she keeps traveling from one country to another to meet her work commitments. Sometimes the flight becomes the home of the star as they literally have to eat and sleep in the flight itself. One such picture of the global star Priyanka Chopra is going viral on the internet as she sitting in an Indian way. The diva could be seen donning a black and white check shirt, paired with beige pants and a jacket. But it was her posture that took everyone’s attention as PC was sitting was with her legs crossed. 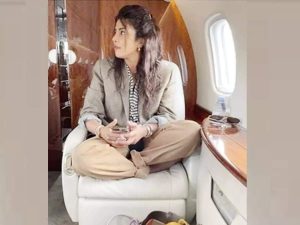 The pictures are clicked by Priyanka Chopra’s mother, Dr. Madhu Chopra. The images immediately went viral and netizens started pouring in many loved comments on the post. “She is a true desi girl,” wrote one user. “loved the way she is sitting,” wrote another user. “the most comfortable Indian style,” commented another user. Recently, there was another post shared by actor Osy Ikhile about PC which went viral on social media platforms. The post featured Priyanka Chopra’s dog Diana and her sipping champagne.

On the work front, Priyanka Chopra was in Paris to host a ceremony at Paris for the Global Citizen Live. “There has never been a greater need for advocacy than right now,” Priyanka said at the event.