Bollywood’s power couple Deepika Padukone and Ranveer Singh has been making the headlines recently for their recent investment. The couple was spotted by the fans and media at a local registrar’s office in Alibaug yesterday. Although until today, the details about the property were completely under the wraps, now the reports are doing the rounds about the price of the property. Reportedly, the star couple has invested in a bungalow which is worth 22 crores along with a stamp duty of Rs 1.32 crore in the coastal city. 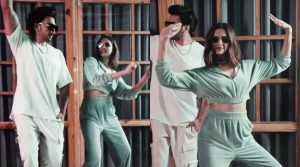 The couple reportedly drove from Mumbai to Alibaug to take a look at the property and purchase it. Now the details of the bungalow are out and it is reported that the property has five bedrooms and the space spread across 9000 sq meters in the village named Mapgaon. The couple has bought the property via their firms called RS Worldwide Entertainment Private Limited and KA Enterprises LLP, respectively.

Yesterday, on the way to Alibaug, actress Deepika Padukone dropped a picture of her husband Ranveer Singh in the car. The actor in the picture could be seen taking a nap while on the way to Alibaug from Mumbai. Deepika posted the snap on her Instagram handle and captioned it, “My morning view” with an emoticon of Kiss. Ranveer Singh later commented on the picture lovingly saying, “Baby, Kya yaar”.