If there are two professions that are considered big in our country then it’s undoubtedly Cricket and Bollywood. Both the actors and cricketers and actors are treated as god and when the two personalities from these professions fall for each other then it becomes the talk of the town. It’s not the first time when a cricketer is seen dating a Bollywood actress and the living example of this is our favourite Virushka. 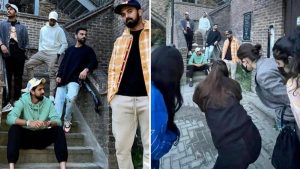 Apart from Virat and Anushka, the pictures of the Indian cricketer KL Rahul and actress Athiya Shetty are doing the rounds on the internet. Although none of them have come out in public and accepted anything about their relationship, their pictures together are quite evident that both are quite fond of each other. The couple currently is in England and keeps posting their candid pictures on their respective social media handle. 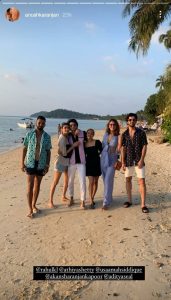 KL Rahul is on the cricket tournament where the actress is accompanying him and if reports are to be believed then KL Rahul has mentioned Athiya’s name in the partner’s list. Recently on Friendship’s Day, Athiya Shetty’s friend Anushka Ranjan posted an unseen picture of their Thailand trip that also had KL Rahul in it. Anushka’s Thailand picture from 2019 has Athiya hugging one of her friends while KL Rahul is standing next to her. The picture also has Aditya Seal, Anushka Ranjan, and other friends.

Apart from KL Rahul and Athiya Shetty, actress Anushka Sharma has also accompanied her husband Virat Kohli to the tournament.