Bigg Boss 14 winner Siddharth Shukla’s untimely demise has left us shaken to the core. The 40-year-old actor passed away after suffering a massive heart attack. His death has sent shockwaves across the entertainment industry and people close to him are still trying to come to terms with his untimely demise especially his ladylove Shehnaaz Gill. She has chosen to keep away from the limelight and only participated in the promotions of her recently released movie “Honsla Rakh”.

On October 28, 2021, Shehnaaz had shared her first ever post on Twitter 56 days after Sidharth Shukla’s death. Sharing a poster with a happy picture of her and Sidharth from Bigg Boss 13 she had captioned the post as, “Tu mera hai aur …………………… @realsidharthshukla #Sidharthshukla.” Take a look:

After the release of the music video, “Tu yaheen hai” many fans were nostalgic remembering Sidharth Shukla. But Shehnaaz’s tribute didn’t go down well with  a section of netizens and they lashed out at Shehnaaz for same.The tweet can be read as, “Here we are still mourning this unfortunate event n people who claim to be his close friends are selling emotions in the name of a tribute. Asking us to make reels on someone’s death, counting views and likes! How low will they stoop? Stop the mockery! Stop using Sidharth Shukla.”

After a series of negative comments, Sidharth Shukla’s friend, Aly Goni came out in her support and reposted the tweet and captioned it as ”Stop it guys seriously.” However, there was a misunderstanding and to clear that he tweeted once again and claimed that it was Shehnaaz’s right to pay tribute to him. His tweet can be read as : 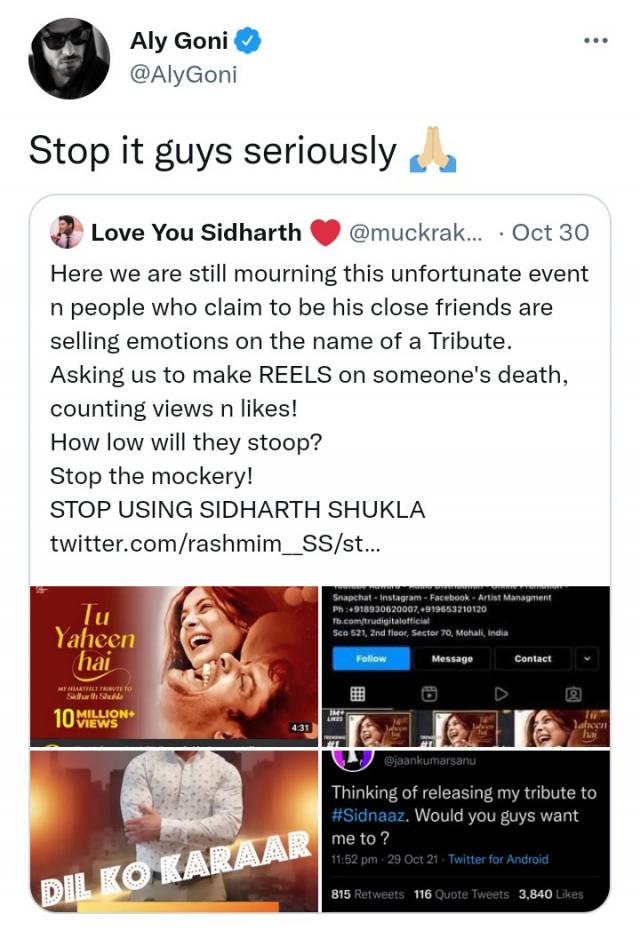 “I think there is a misunderstanding in my last tweet. First of all Shehnaaz Gill ka poora haq banta hai to tribute (Shehnaaz Gill has all the right to pay her tributes) and I loved that song. Secondly, that tweet was for those people who drag Sidharth Shukla in the name of cover songs reels and all. Jo uss tweet mein mention tha. #PeaceOut.” 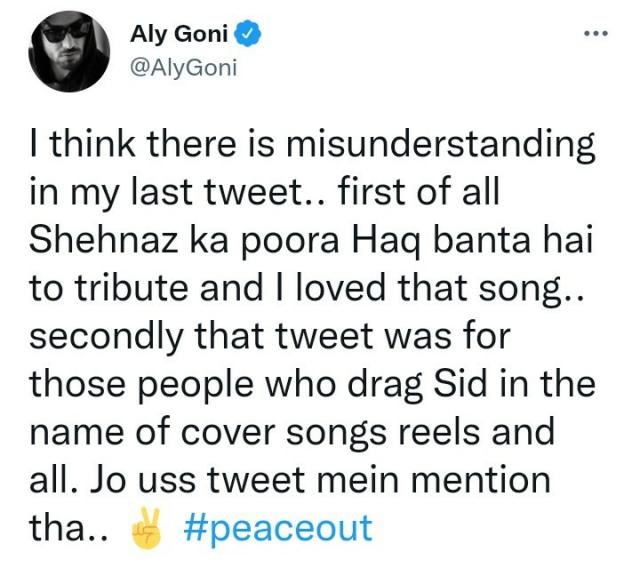 For the unvesred, Siddharth Shukla and Shehnaaz Gill met on the sets of Bigg Boss 13 and have been inseparable ever since. They had an undeniable sizzling onscreen chemistry. Shehnaaz has always been vocal about her feelings for Siddharth while he had always maintained the “good friends” stance. The bubbly actress has always professed that she is not going to leave him but destiny had other plans.