Ranveer Singh pulls off a look for his Gucci shoot, taking internet by a swirl of memes!!

The Padmavat actor, who is known to make bold and eccentric fashion statements, and can pull any look he wishes. The powerhouse of energy, Ranveer did it again in his latest photoshoot with Gucci. He is rocking an ocean blue tracksuit, with a gold necklace. Along with, the luxury brand’s mustard yellow monogrammed socks, paring matching sunglasses, showing off his long locks. 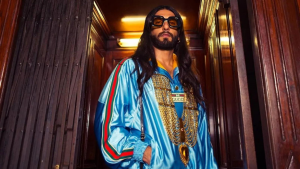 Twitter compared him with Jared Leto for his tresses and made hilarious memes on it. Have a look! 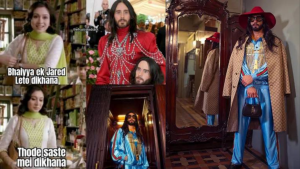 He is looking absolutely stunning and has gained so much attention in a span of few days. People are admiring and making memes about him at the same time. Well, this is not something new for him. He often rocks these kind of androgynous outfits quite easily. 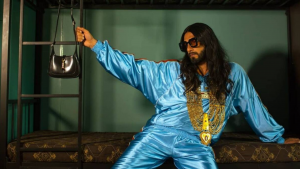 People often asks him if he shares Deepika’s wardrobe, and styles all her clothes as he wishes. Many designers noted the look while, ranveer dominated social media with a load of memes on him. Oh! we loved seeing him in his unique avtar, and hope to see more of him soon.