Ranbir Kapoor Protects Alia Bhatt As The Couple Got Mobbed At Jodhpur Airport; Check Out The Video Inside

Bollywood actors work really hard to reach a certain level in their careers and have their fan following. However, sometimes the fans get so overwhelmed that they would do anything just to get a picture with your favourite actor. Ranbir Kapoor and Alia Bhatt are among the most loved couple of Bollywood and when the fans got to know that they are in their state, they couldn’t keep calm. The crowd gathered around the airport just to get a selfie or autograph from their screen idols. 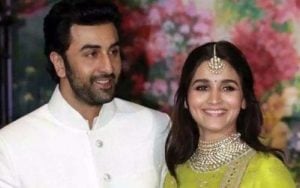 The duo had visited Jodhpur on the weekend to celebrate the 39th birthday of the star. As soon as the couple started walking towards the airport Paparazzi and the fans arrived to click pictures. Ranbir could be seen donning a black hoodie and olive green cargos, while Alia kept it simple with a white shirt, nude bust top, and wide-leg jeans. Both the actors were wearing masks and sunglasses. 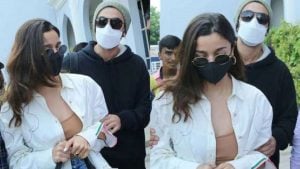 In the video that is doing the rounds on the internet, Ranbir Kapoor could be seen protecting Alia Bhatt by creating a shield with his hands. After a struggle of 5-10 minutes, the couple finally made their way inside the airport. Another person could be seen covering Alia Bhatt from one side as the paparazzi kept on following them till the entrance of the airport.

On the work front, both Alia Bhatt and Ranbir Kapoor have many interesting projects in their kitty. The duo will also be seen together in their upcoming movie Brahmastra which is directed by Ayan Mukherjee. The Movie will also have Amitabh Bachchan and Mouni Roy in important roles.