Nikki Tamboli during her stint at Bigg Boss 14 had carried her boyfriend’s boxer along with her to the house. There was a whole lot of discussion about the boxers and fans wondered why she would carry her ex-boyfriend’s boxers to a reality show. Many called it a gimmick while some thought Nikki was being the drama queen that she is. But Nikki had later clarified that it wasn’t a  gimmick.

She was quoted as saying, “That was not a strategy to highlight myself. I was genuinely missing him. When I was going inside the house, I knew that I was going to miss people who I love. So, I had taken my father’s clothes as well along with my ex-boyfriend’s boxers.” 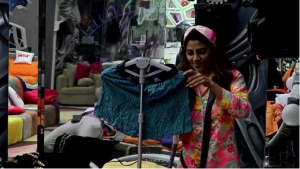 In a recent interview when she was again questioned about the boxers and she revealed that her ex-boyfriend had reached out to her after the show and had said, “Oh really, you have my boxers? I thought you’d forgotten my face”.

During her stay at the Bigg Boss house when Rj Siddharth Kannan questioned if there was any chance of reunion she had clearly stated that she only likes the boxers and not the man to who they belong.

Stay tuned for your daily dose of entertainment.