Kriti Sanon Would Like To Marry her THIS co-star; Check Out The Details Inside

Kriti Sanon is one of the most talented actresses in Bollywood in the current times, she is also known for her unique choice of scripts. And is currently busy shooting for her next feature film Adipurush with actor Prabhas. The film has already garnered a lot of attention ever since its cast was announced. The movie will be directed by ace director Om Raut and will be based on the ancient Indian Sanskrit epic Ramayana. 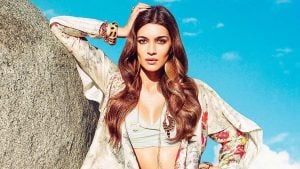 Fans and followers are already waiting for the movie to be released which will also have Prabhas in the lead role. Prabhas has got a massive fan following not just in the south but also across the country. In an interview with a TV channel, when Kriti was asked about who she’d date, flirt and marry. She was also given options that included Kartik Aryan, Tiger Shroff, and Prabhas. To which Kriti responded and said, “I would date Tiger and flirt with Kartik and would rather get married to Prabhas”. We appreciate her answer and like millions of other girls would like to marry Prabhas for his down-to-earth personality and brilliant acting skills.