Kareena Kapoor Khan Opens Up On Sending Taimur To Boarding School: The Life We Have In The Movies Might Push Us

You all must have heard of Ranu Mondal who became an overnight sensation for her commendable singing talent and it was Himesh Reshammiya who made her a star. For those who have been living under rocks Ranu, a talented singer who was filmed singing Lata Mangeshkar’s famous song Ek Pyar Ka Nagma Hai at Ranaghat Railway station in West Bengal the video went viral and her life flipped. She shot to fame overnight from being found at a Railway station to getting a makeover to getting signed by Himesh Reshammiya for his upcoming film. Rumours had it that Bollywood superstar Salman Khan has gifted Ranu a flat worth Rs 55 lakhs and also a chance to sing in his upcoming film Dabbang 3.

Earlier when such rumours surfaced on the Internet Ranu Mondal’s manager had denied all such rumours and now Salman has also denied such rumours. Salman Khan told Bombay Times “That’s false news. Even I have heard this. What I have not done, there is no credit for that. I have done nothing like that.” 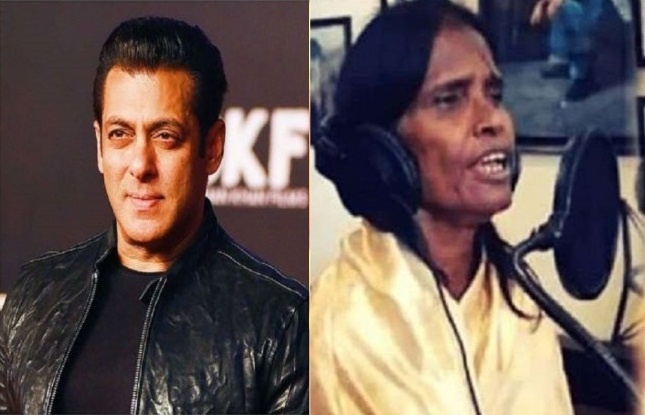 Meanwhile, Ranu Mondal has become the talk of the town. From Himesh Reshammiya to Shankar Mahadevan every popular singer of the industry has appreciated Ranu Mondal for her commendable singing talent. Himesh was all praises for Ranu and was quoted as saying, “During the making of Aadat I realised that Ranu Ji is not a one-song wonder, you will agree once you hear Aadat. She is truly sounding divine and versatile. A great talent, thanks for all your support lots of love”.

Epic Blockbuster song Teri Meri Kahani from Happy Hardy And Heer for all of you in 5 parts, thanks for all your love and support, Check out part 4 #happyhardyandheer #terimerikahani #titlesong #song #film #movie #bollywood #instasong #trending

Ranu has already recorded for two songs “Aadat” and “Teri Meri Kahaani” for Himesh Reshammiya upcoming “Happy Hardy and Heer”. Ranu Mondal is living the life of a star now but things were not the same before. Talking about her struggles Ranu was quoted as saying, “I wasn’t born on a footpath. I belonged to a well-to-do family but it was my destiny. I got separated from my parents when I was just six months old. We had a house but you know you need people to maintain it. There were so many days of loneliness. I struggled a lot but always believed in God. I used to sing according to situations. It wasn’t to get singing opportunities, just for the love of singing. I used to learn songs from Lata Mangeshkar. She didn’t teach me but I learnt from the radio and cassettes”.

After the epic blockbuster track teri meri kahani , Recorded another track Aadat from happy hardy and heer in the divine voice of Ranu mandol , here’s the glimpse of the song , the alaap and voice over is the theme of happy hardy and heer , thanks for all your love and support

Well, everybody has his/her own story of struggle and those who stand strong emerge victorious and so did Ranu. We wish them all the best for their future endeavours.