Father-To-Be Rajeev Sen Is Very Excited As Wife Charu Announces Pregnancy “I am so excited, I’m sure Charu and I will be great parents”

TV actress Charu Asopa and model-turned-actor Rajeev Sen had recently announced their first pregnancy. Almost two years after getting married to Sushmita Sen’s brother the beautiful actress is expecting her first child with him.  She recently announced her pregnancy through an Instagram post. In the picture, the actress looked radiant exuding pregnancy glow and flaunting a baby bump.  She captioned the picture as, “Grateful Thankful Blessed”. Take a look:

Now the elated father-to-be had shared in an interview with a leading daily that he is very excited. He was quoted as saying, “I am absolutely thrilled and so excited. I still cannot believe the fact that we are going to become parents. It feels like a dream. But it is a dream that has come true. Initially, when I heard the news, I could not believe that I will become a father in a few months.” 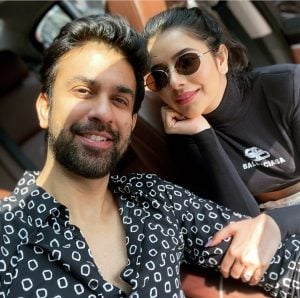 He had further added, “Charu is with her family in Bikaner as she needs a lot of care and the right kind of food for herself and our baby. She is very close to her mother, who is taking great care of her. I am hoping to join them soon after the pandemic situation improves. We are both looking forward to new innings in our lives”.

In an interview with Hindustan Times, Charu Asopa had earlier revealed her first reaction when she came to know she was pregnant and said, “I remember I was shivering in the bathroom, and couldn’t even come outside for 15-20 minutes. Then I told Rajeev and he was also confused and didn’t know how to express. It was late at night, we didn’t know if we should tell the family then or wait until morning. Then we video called everyone at 12:30am, I wish I’d have recorded their expressions. They all were so happy.”

Earlier this year there were rumors of their marriage hitting a rough patch. It was alleged that Charu had accused Rajeev of leaving her alone during the lockdown. But the duo made up soon after.