As Kareena Kapoor Khan And Saif Ali Khan Gets Trolled For Naming Their Son “Jehangir”, Saba Ali Khan Comes To Rescue, “What’s In A Name?”

It was in December 2016 when Kareena Kapoor Khan and Saif Ali Khan had welcomed their first child in 2016 whom they lovingly named Taimur Ali Khan who became a sensation in no time. After four years the couple embraced parenthood once again as they welcomed their second baby boy. But unlike the last time, when Taimur was born,  this time Saif and Kareena have refrained from posting pictures of their newborn son’s face on social media and keep him away from the limelight.

Ever since there have been many speculations around Kareena’s second son’s name. Earlier in July, Kareena’s father Randhir Kapoor had revealed that the little munchkin is called “Jeh” by his parents. And with the launch of Kareena Kapoor’s much-awaited pregnancy bible, we got to know that his name was short for Jehangir. Kareena Kapoor Khan’s pregnancy bible includes the revelation of both his full name which is Jehangir Ali Khan and a picture of him at the very end of the book as per a report in Bollywood Hungama.

As soon as the news of Kareena Kapoor Khan and Saif Ali Khan naming their second son “Jehangir”(who was also a Mughal leader) surfaced on the internet Hindutva fanatics went on a slamming spree. This came as a crude reminder when Saif and Kareena were subjected to a lot of hate when they named their firstborn Taimur Ali Khan who was a “Turkish invader”.

And now Saif’s sister Saba Ali Khan has come out in support of her brother and her bhabhi Kareena Kapoor Khan. She took to her Instagram stories and shared a picture and wrote atop of it, “Jeh…jaan. What’s in a name? Love…live and let it be. Children are God’s blessings,” followed by heart emoticons. Take a look: 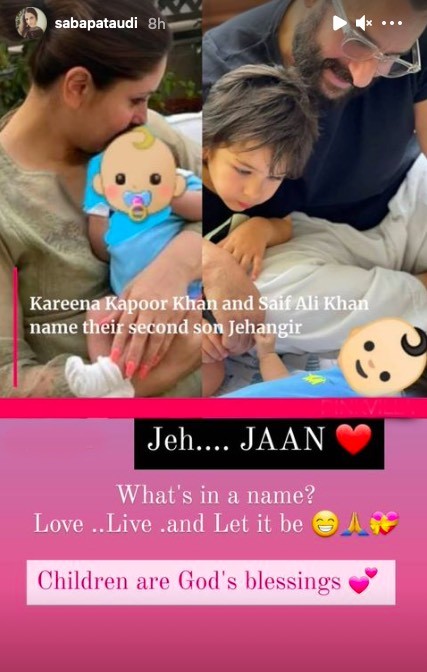