Yeh Rishta Kya Kehlata Hai actress has been accused of infidelity and physical assault by his wife Nisha Rawal. However, the actor has denied all the allegations against him of having an extramarital affair and called them “baseless”. He also mentioned that these stories are bound to come up and he will be linked with many as he is being framed by his wife. Amid all this his friendly chat with co-star Himanshi Parashar is going viral and both Karan and Himanshi are being bashed by the netizens. Fans are flooding the comments section with comments like “Chhi”.

For those who are unaware, Himanshi had shared a video with Karan from the sets of their show “Mawaan Thandiyan Chawan” and had captioned it as, “Karan says that i’m a down to earth person @realkaranmehra i knw it’s lame. #bts @maavanthandianchaavan @zeepunjabi_off.” Take a look:

Replying to this, Karan wrote, “I had said “Itna bhi nahi girna chahiye ki aap zameen pe aa jao” Cute moment and fun shooting with you.” To which Himanshi replied, ” apke liye hum kahi bhi gir jaynge karan ji”. And this fun banter between Karan and his co-star is not going down well with the netizens and they are speculating if Himanshi Parashar is the one he is having an affair with. 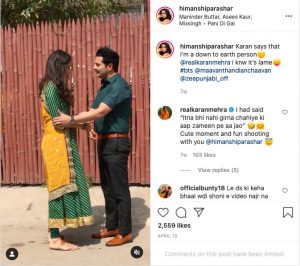 After facing a lot of backlash and criticism both Karan and Himanshi have now limited the comments on their posts on Instagram.

Earlier Nisha had accused Karan of having an extramarital affair. She had revealed, “Karan has been having an affair with another girl, which I didn’t know about. When I came to know about it, he accepted that he has another girl in his life. I asked if he has physical relation if it’s a serious affair or an emotional one. He said ‘I love that girl. I have been having physical affair with her.”